“I met the boy I wanted. But then he vanished and a new man claimed me instead. My father approved, my colleagues congratulated, and behind closed doors, I was bedded by a stranger.”

Noelle Charlston lived a fairy-tale life: a doting father, a powerful job, and a future blessed with financial security.

Noelle’s freedom was no longer hers. It belonged to the man her father believed was the perfect match. The man who pulled his lies over everyone he touched.
Including her.

Seduced and manipulated, Noelle lives two lives. The one everyone sees on the outside and the one no one sees on the inside. The lies he spins, the truth he hides, the mystery he webs—it’s all enough to slowly erode the woman she’d been and turn her into something else.

Until her past collides with her present.
And it’s her turn to lie.
To everyone…including herself. 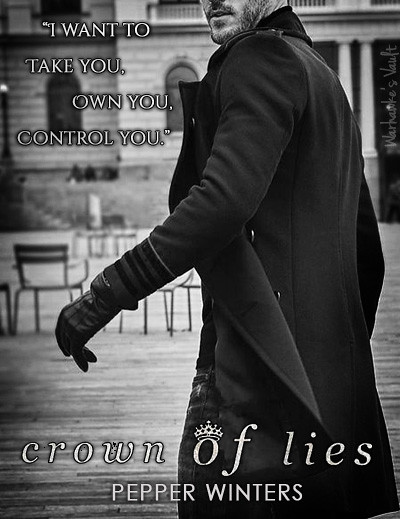 Noelle (Elle) Charlston was a New York City heiress. Groomed to take over the empire since she was a young kid, she had no life behind her gilded cage. One rebellious night, she decided to see the world for herself only to end up in a predicament that that still haunted her years later.

Penn Everett came out of nowhere to weasel himself into Elle’s life. His allure was irresistible but his life was a blank page that she’s willing to overlook until a secret came out that might be too much for her to handle.

I wasn’t really sure what this book is about before reading, but I’m glad I took a chance and ended up enjoying it.

He looked arctic and unreadable. He smelled expensive and impenetrable. He sounded powerful and untouchable. My worst nightmare wrapped in perfection.

Penn was a sexy hero. He was aloof, yet intense. I like how he handled situations to favor his way.

For someone powerful and influential, Elle was a major contradiction. Inside, she was unsecured and naive. She could be a pushover but I’m glad she showed her spine when needed.

“I can make you do things, Elle. Things you want to do. Things I want to do.”

I really like how the mystery/suspense element carried the book. It kept me flipping the page, wanting to know more. However, I think there were too many unanswered questions for it to have a ground to keep me satisfied. It felt dragged out when there wasn’t enough answers.

Penn and Elle had a great pull which in turn produced explosive sex scenes. I like how intense their encounters were.

“Careful what you wish for, Elle. Sometimes, secrets make things better not worse.”

Crown Of Lies is a story a woman’s attempt to break free and taking control of her life. It would appeal to readers looking for a sexy, suspenseful story.

Read as part of Shh… ARC(F)BR.