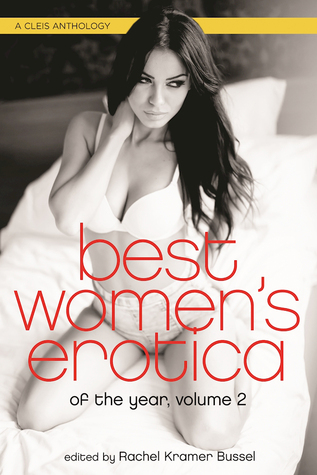 Best Women’s Erotica of the Year, Volume 2 gives us fierce female passion, timeless love, and lustful encounters that are guaranteed to fill you with utter delight. Editing by the award winning Rachel Kramer Bussel, these sexy stories about women on the prowl span the globe, traveling from Peru to the Bahamas and beyond in pursuit of pleasure. Learn why “Teacher Appreciation” is so special, what sex is like “At the End of the World,” and explore some very explosive “Volcano Nights.” These unforgettable erotic tales by the top authors in the genre as well as newcomers will arouse and thrill readers looking for a hot time between the pages. 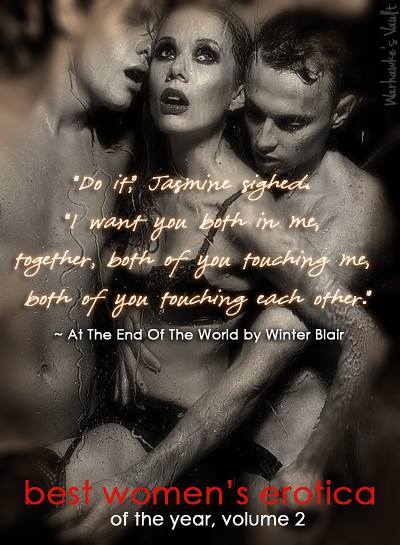 I read 11 of the stories and you can read my short snippets of each one below. Or skip it if you rather go in blind.

Note:
One thing I learned from Volume 1 and 2 is I discovered how hot historical stories could be. I’ve never read a full length historical erotica but I think I would now lol!

He pulled at the fabric of my dress by my hips and whispered, “Intermission lasts for twenty minutes.”

A musician took a sensual detour with his lover during an opera performance for a different kind of high notes.
✦ 4 stars
✦ M/F, mild kink, older man

A Domme reached a new level of communication with her favorite sub.
✦ 4 stars
✦ F/F, D/s, toy

★ ON HIS KNEES by Eve Pendle ★

Having seen the beauty of a strong man bowing to her will, she couldn’t bind herself to a man who wouldn’t use his passion to submit to her.

★ AT THE END OF THE WORLD by Winter Blair ★

She used both hands to caress the length of his circumcised manhood, and then drew it into her mouth. She hadn’t tasted a man in so long; she hadn’t known she could miss it so much.

A year after an outbreak, a woman lonely and weary found a new hope when she came across two healthy men.
✦ 4.5 stars
✦ M/F/M, post apocalyptic

She shivered when she felt a drop rest at the raised pucker of her ass and threaten to keep going, before she felt a hot breath and then the tickle of a tongue licking it off.

★ ANOTHER WAY TO START A FIRE by Kristy Harding ★

The fire burned lower still , and Gwynn answered Emily’s hunger with an open mouth, igniting another wave of passion that pushed her head into the hardwood floor.

A programmer holed up in a winter cabin to find “inner peace” and discovered it took a certain kind of mental state to achieve her goal.
✦ 3.5 stars
✦ F/F

This wasn’t the first time in three years that I’d touched myself. And whenever Zack was close by, he knew. He knew that I sometimes touched myself and thought of him.

A researcher learned to let go of her control and rewarded by her test subject.
✦ 4.5 stars
✦ M/F

This man made me cream with just the timbre of his voice. He was dangerous.

Her nipples stood like flagpoles, both chilled and excited. He lapped at them eagerly, then grew more serious, sucking and probing with his tongue.

A woman at a crossroad in life found her path amidst the beauty of nature.
✦ 4.5 stars
✦ M/F

★ ON SOME MAPS, BUT NOT ON OTHERS by Annabeth Leong ★

I’d heard about stroking a cock, but I was pretty sure most people didn’t do that with the points of their nails. Alex screamed and twitched, muscles straining, cock seeming to writhe in my girlfriend’s hands.

A woman with gender crisis found a way to experience something she couldn’t normally get.
✦ 4.5 stars
✦ M/F, F/F, S&M, voyeurism

You give no sign of how heavy you might feel inside , if the wet-clay grip of grief has taken your throat and lungs, if ice has formed in a layer above your frightened bones. Or if the friction of our bodies shakes off anything that might hamper you.